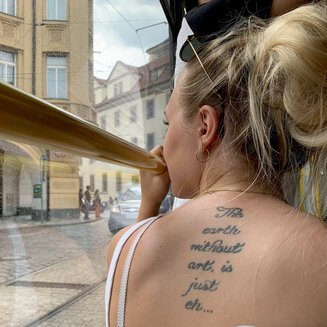 How do you describe your Gallery?:
The Table is a contemporary art gallery curated by the owner curator Val Harris with eleven exhibitions a year.
Do you specialise in any particular artform or craft?:
Val is increasingly drawn to more abstracted art but happy to exhibit figurative work too alongside occasional ceramics, sculpture and jewellery.
What's important to you when you choose whose work to exhibit and sell?:
Val has a regular stable of gallery artists showing every three years and she respects the relationship that has been nurtured with those artists allowing her to represent them in her gallery to her clients. When working with new artists she is looking for the same mutual respect and a desire to work together for the benefit of everyone.
What's coming up this year?:
Val has a fabulous line-up for 2021 starting with Julian Bailey and the late Roger Cecil (1942-2015) followed by Helen Booth and ceramicist Clare Walters. Sophie Windham returns with her solo show to be followed by her mother, Annette de Mestre, celebrating her 85th birthday in June. Father and daughter, Glen and Kim Scouller, show in July followed by local artist, Harry Rich, in August. Sue Hiley Harris fills the hArt slot with David Pearce and Stephanie Richards showing in October. Previous gallery owner, Lynne Strover, brings some of her old and new artists to the gallery in November and we end the year with Karen Birkin returning with her solo show for Christmas.
Your notable exhibitions in the last few years:
Notable for not being open last year were Peter Stilwell, Charles and Daniel MacCarthy and Sam Lock and in previous years I have enjoyed the two exhibitions of the late William Mills (1923-1997) and a Hay festival highlight was exhibiting the work of Martin Yeoman in 2016.
Who are the Artists you show on a regular basis:
In no particular order: Simon Dorrell, Anthea Stilwell, Peter Stilwell, Sophie Windham, Karen Birkin, Charles MacCarthy, Stewart Macindoe, Tania Mosse, Carolyn Blake, Lois Hopwood, Tony Hall, Lottie O’Leary, Helen Booth, Richard Sorrell, Arthur Neal,